SFMTA claims that their recent survey indicates residents are in favor of making some Slow Streets permanent, but they are yet to pass the pudding around for proof. Granted, they have reduced fatal car accidents, even made car light areas feasible in densely populated cities like San Francisco. But, can these be made permanent without broader consensus and dialogue with the residents? That answer is a definite “no”. On the brighter side, they nicely fit into the discourse of sustainability and equity – two major social issues that have incredible relevance in today’s times. 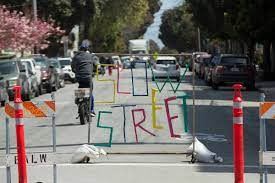 Back when the San Francisco Municipal Transportation Agency (SFMTA) incorporated ‘Slow Streets’ into the city’s landscape, it was a reaction to the changing times. Twenty- five temporary Slow Streets came into existence, giving residents access to improved socially distanced essential travel. The concept was initially met with some backlash but eventually gained immense community support. Now that the COVID-19 pandemic has meandered halfway into 2021, authorities are considering dropping the temporary tag from three different Slow Streets. The fate of Page Street, Shotwell Street, and Sanchez Street hangs in the balance.

The fact remains that Slow Streets aren’t suitable for all neighborhoods. For some of these to become permanent requires a deep and nuanced understanding of the vicinity, its socio-political temperament, and the urge to do something holistic for the community.

In the end, the concept of Slow Streets must incorporate inclusivity, diversity, and sustainability to its very core to be truly successful. Yes, it will change the urban landscape in more ways than imaginable – but this change will be a good one. Or so we hope. Have a blast of a weekend and do tell us your opinion on this change to the city’s landscape!

You’ve got questions and we can’t wait to answer them.